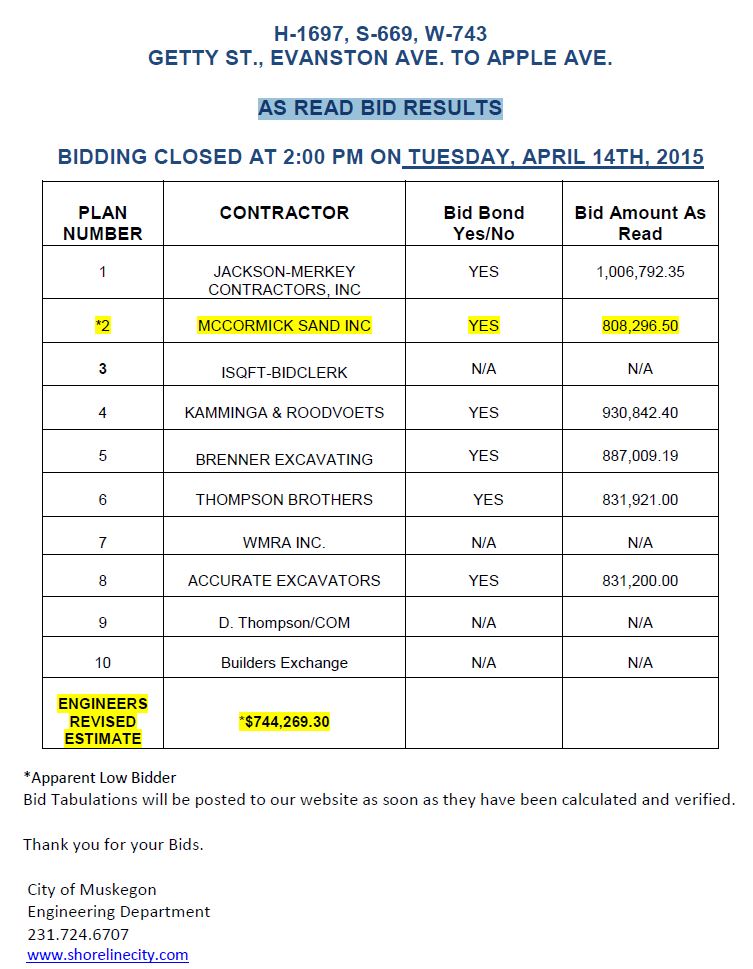 The City of Muskegon, Michigan will receive sealed bids until 2:00 p.m. local time on Tuesday, April 7th, 2015 at the City Clerk’s Office, City Hall 933 Terrace Street, Muskegon, Michigan, at which time and place all bids will be publicly opened and read aloud for the following Project:

Copies of Plans and Specifications may be obtained on or after Monday, March 23rd, 2015 in the City Clerk’s office upon the submission of a non-refundable $40.00 fee for each set. An amount equal to five percent (5%) of the Bid must be submitted with each Bid Proposal in one of three forms acceptable to the City of Muskegon. Contract documents may be examined at the following locations:

Attention is called to the fact that the City requires: that the Contractor consider hiring local work force insofar as possible; that not less than the salaries and wages set forth in the Specifications must be paid; that 14% minority and 6.9% female are the goals established for participation in each trade; that the Contractor must ensure employees and applicants for employment are not discriminated against based upon their race, creed, color, religion, sex, national origin, handicapped condition nor veteran background; and that all pertinent regulations must be complied with. No bid may be withdrawn within sixty (60) days after bid opening.

A Pre-Bid Conference will be held in the second floor conference room (Rm. 203) at City Hall at 10:00 a.m. on Tuesday, March 31st, 2015 at which time and place any questions regarding this Project should be presented. Minutes from said Pre-Bid Conference would become an Addendum to the Contract.

The City will provide necessary appropriate auxiliary aids services, for example, signers for the hearing impaired, audiotapes for the visually impaired, etc., for disabled persons who want to attend the meeting, upon twenty-four hours’ notice to the City. Contact:
Ann Marie Cummings, City Clerk
933 Terrace Street, Muskegon, MI49440
(231) 724-6705 or TTY/TDD DIAL 7-1-1 to Request a Representative to Dial
VISIT OUR WEBSITE AT www.shorelinecity.com
V
202-91318-5346