MUSKEGON, MI –The MuskegonCity Public Art Initiative (MCPAI), which was established in July of 2018 to develop and oversee the commission of 10 monumental works of public art, announced today that they have finished the installation of both Projects 5 and 6 of the 10 they plan to complete. The MCPAI is a project of the Community Foundation for Muskegon County.

WHAT DEFINES MUSKEGON by Dr. Hubert Massey of Detroit was completed in May. ONE DROP by artist Marc Moulton of Statesboro, Georgia will be installed at the VanDyk Mortgage Convention Center the week of July 18 and will commemorate the 70th Anniversary of the Women’s Division Chamber of Commerce.

WHAT DEFINES MUSKEGON is the story of Muskegon as community participants, through a series of five community forums and four feedback sessions, shared it with Massey. From those sessions, Massey, who had not ever visited Muskegon prior to this, has created a remarkable portrait of Muskegon. The visual story that Massey tells highlights the continuing presence of the indigenous tribal peoples, our lumbering boom and the industrial waves of progress that followed, the impact of the Great Migration on our community in the 1930s and 1940s which helped to fuel Muskegon’s remarkable contribution to the war years, our present and rich diversity, and the transformation of our community into this vibrant and diverse place rich with opportunity, culture, and a natural environment.

Massey’s 65-foot by 12-foot mural, painted in oils on aluminum composite panels, is installed on the exterior wall of the Trinity Health Arena in downtown Muskegon. It was originally installed in December of 2021 and because of additional community input was modified and finalized in May of 2022. This project was done in collaboration with the Downtown Arts Committee of the Community Foundation for Muskegon County, the Muskegon Heritage Museum, the James Jackson Museum of African America History, and the YEP Program of Community enCompass.

Massey, a muralist, fresco, and mosaic artist, is a Michigan native hailing from Flint and a graduate of Grand Valley State University. An award-winning Kresge Fine Arts Fellow, Massey’s distinctive fresco murals grace the halls of such visible Michigan destinations as the Flint Institute of the Arts, Detroit Athletic Club, and his alma mater, Grand Valley State University, where he earned an honorary Doctor of Fine Arts in 2012. In 2014 the
A Project of the Downtown Arts Committee and the Community Foundation for Muskegon County

Detroit Regional Convention Facility Authority commissioned him to create the first large-scale mural completed for the Cobo Center, now called the Huntington Place, since 1987.
Massey also studied at the University of London’s Slade Institute of Fine Arts and later learned the centuries-old fresco technique from former assistants of legendary Mexican artist Diego Rivera. Today Massey is one of the very few fresco artists in America. 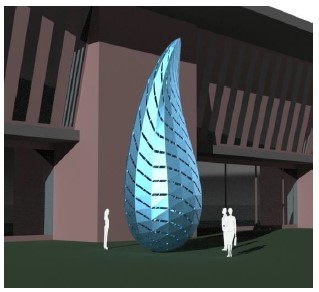 ONE DROP is the sixth project of the MuskegonCity Public Art Initiative and has been a partnership between the Women’s Division Chamber of Commerce and the MCPAI. This beautiful sculpture commemorates the 70th Anniversary of this remarkable service organization whose first meetings were held at the storied Occidental Hotel in downtown Muskegon beginning in 1951.

Inspired by the Women’s Division Chamber of Commerce and by how individual efforts when combined become major triumphs, ONE DROP is a simple form built from rhythmic streams of individual pieces, visually illustrating how many individual elements together create a dynamic whole that cannot be denied. As a symbol of our beautiful and nearby waters as well, ONE DROP illustrates the vitality of both our environment and the remarkable efforts and impact of the Women’s Division for the past 70 years in our community. The 27-foot sculpture is comprised of individually cut pieces of tinted prismatic steel assembled on a structure of steel lit dusk to dawn with LED lighting and has been created by artist, Marc Moulton.
A Project of the Downtown Arts Committee and the Community Foundation for Muskegon County 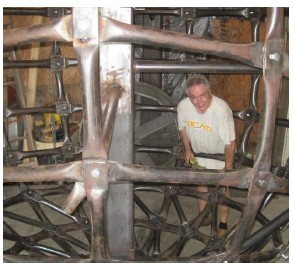 Moulton, who received his Master’s degree in Fine Arts from The Ohio State University, grew up in Utah and has been influenced by the mountains and national parks of that region. He often incorporates glass, light, and stone in fabricated works of stainless steel or aluminum. Moulton’s outdoor public sculptures have been placed nationally at state and local municipal buildings, parks, hospitals, and private commercial buildings. Specific works have commemorated the attacks on September 11, 2001, honored Martin Luther King, Jr., and celebrated blues singer, Blind Willie McTell.

Moulton has served on or consulted for public art committees of both municipalities and universities. He is a sculpture professor at Georgia Southern University and maintains a professional studio in Statesboro, GA where he lives with his wife and rescued pets.
ONE DROP will be dedicated on July 21, 2022, at 5:30pm on the plaza between Shoreline Drive and the VanDyk Mortgage Convention Center. The public is invited and welcome to attend.
~~~
Previous works completed by the MCPAI since Jul 2018 include MOXIE and the MASTODONS ON THE LOOSE installed at the Lakeshore Museum Center, A CITY BUILT ON TIMBER at Heritage Landing, CELEBRATING MUSKEGON at Pere Marquette Park, and the four murals on two Seaway Drive rail bridges comprising the MUSKEGON RAILS Project.

Since its inception, the MCPAI has leveraged the initial philanthropic commitment of $25,000 per installation, totaling thus far $150,000, to a total of $923,046. Of that total, 82 per cent has been private donations, 14 per cent Michigan art and community development funds, and 4 percent local city and county funds.

The MuskegonCity Public Art Initiative is a project of the Community Foundation for Muskegon County and anticipates its last four projects being completed over the next two or three years. Details on Project 7, planned for Muskegon Heights, will be announced later this summer.

Press Release-WDM and ONE DROP