MUSKEGON, MI – The citizens of Muskegon continue to show incredible philanthropic support for public art in their community as a fourth of an expected 10 significant public art projects has been funded. 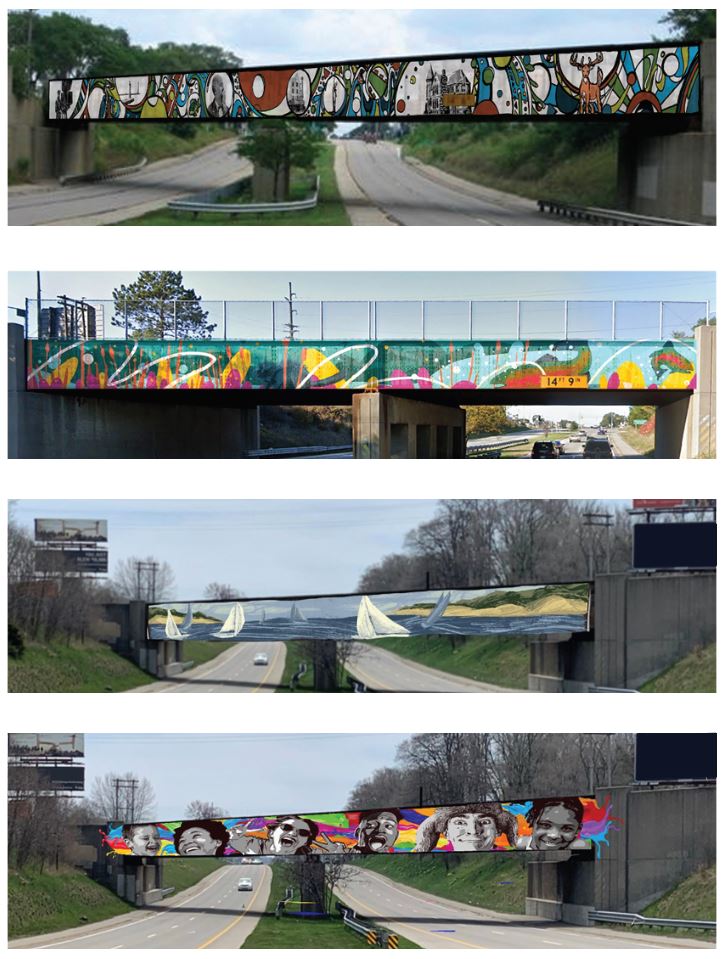 The MuskegonCity Public Art Initiative recently announced the latest public art success – full funding of the Muskegon Rails Project. This is the painting and placing of murals on the four sides of two, long-rusting railroad bridges along Seaway Drive in the cities of Muskegon, Muskegon Heights and Norton Shores.

The community again rallied to support a public art project through the Michigan Economic Development Corp.’s Public Spaces Community Places program. The public art initiative and the three participating cities raised $52,750 through Patronicity, releasing a $50,000 state grant. The state and donors’ contributions will be added to MuskegonCity Public Art funds from the Community Foundation for Muskegon County. This project as well as three others also are receiving support from the Howmet Aerospace Foundation.

The final support for the $207,000 Muskegon Rails Project comes from all three cities through direct and indirect contributions. With one of the bridges primed and prepped and the other expected to be prepared soon, the three West Michigan artists and one from Southeast Michigan hope to paint their murals in May.

The cities have submitted permit applications to the Michigan Department of Transportation and the Genesee and Wyoming Railroad to get the work completed later this spring, according to Judy Hayner, director of the art initiative.
“The collaboration between the three cities has been impressive and shows the real strength of our community,” said Hayner, the retired executive director of the Muskegon Museum of Art. “This has been a compelling effort you can’t deny.”

The MuskegonCity Public Art Initiative was created as a special fund in the Community Foundation by Patrick O’Leary, who was chief financial officer for the SPX Corp. for five years when the company was headquartered in Muskegon. O’Leary, retired and now the chairman of the SPX board, loves Muskegon and continues to support the community through the Community Foundation for Muskegon County, Hayner said.

O’Leary’s $250,000 public art contribution is being used for $25,000 startup grants for 10 “permanent, monumentally-scaled” public art works. Hayner and the Downtown Arts Committee of the Community Foundation – first established in 2002 – are responsible for the development of 10 works, including finding locations, identifying local history and stories that can be showcased through art, finding the right artists who can create monumental works, and then raising the funds from the community to commission the works.

Here are the MuskegonCity Public Art Initiative projects to date:

Hayner says that the remaining four additional projects may include a large-scale sculpture by a Muskegon artist for a 2022 installation; a sculpture installation at the Robert C. Lighton Memorial Park in front of the Muskegon County Hall of Justice; possibly a Buster Keaton-inspired sculpture in Muskegon’s Bluffton neighborhood; and she is starting conversations with Muskegon Heights leaders for a specific installation for that city.

“Our public art collection is simply more evidence about the uniqueness of Muskegon,” Hayner said. “Muskegon is an interesting town because it’s big enough to have a lot of great assets but it’s also small enough that you can make things happen. Muskegon makes things happen!”