May 3, 2014, we just opened the new Muskegon Farmers Market at its downtown location.

Pursuant to Section 98.35 of the City of Muskegon Code of Ordinances, persons owning property in the City of Muskegon are hereby notified that they are responsible for tall grass, noxious weeds and overgrowth on their property. Vegetation must not be taller than eight inches. Properties shall be maintained to ordinance standards or the City will 1) clean the property and bill the property owner for the clean-up/mowing plus an administrative fee and/or 2) provide a civil infraction to the property owner for a violation of a City Ordinance. This public notice will be the only formal notices sent advising property owners of their responsibility. 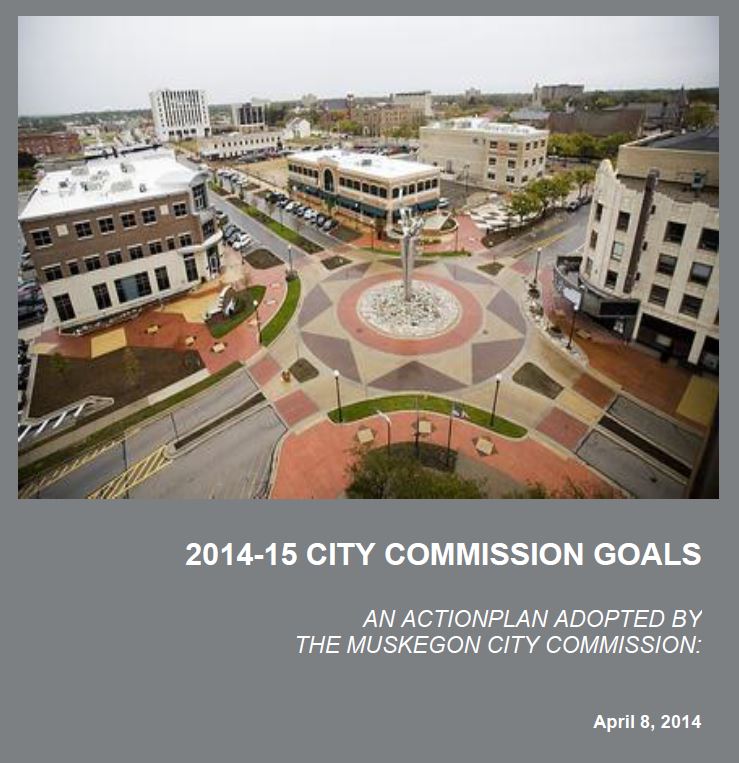 Outstanding Citizenship of the Year

Three citizens have been chosen as recipients of the 2013 Outstanding Citizenship of the Year Award.  They are Shirley Green, Greg Borgman, and Debra Griffin.

Shirley Green is described as dedicated, trustworthy, ambitious, and a leader.

Shirley resides in her home which is located approximately 200 feet from her childhood residence.  Her deep love to this city and area is the deep motivation for all the planning and beautification she so aptly does for Lakeside and the City of Muskegon.

A ride through Lakeside will prove what a wonderful job Shirley has done trying to revitalize our area.  The overgrown, greatly neglected empty pocket park next to Booker Institute on Lakeshore Drive, was an eyesore to all.  Shirley’s dream was to provide a place where people could sit and enjoy the beauty of Lakeside and Muskegon Lake.  With many hours of hard labor by Shirley and others, it is a place of beauty.  The watering, planting of shrubs and flowers is done by Shirley and her family.

Shirley has been involved in many events including:  spearheading the holiday basket drive for the shut-ins in her neighborhood, assisting several school functions, involvement in the Lakeside Neighborhood Association, the Lakeside District Association, and Muskegon Medical Associates, as well as organizing the Lakeside Easter Egg Hunt, and volunteering for the Memorial Day Parade in Lakeside.  Each year she hosts a pumpkin roll down the hill of her dead-end street.

As one friend states, “Shirley is a strong minded person.  If she is unable to do it herself, she will find the necessary people to help her accomplish her goal.  I admire her for her strong will and willingness to keep fighting for her community.”

Shirley has a deep devotion to our city and community.  Her hard work and dedication to her community makes her an exemplary citizen.

Greg Borgman is described as caring, trustworthy, and respectful.

Greg is a lifelong resident of the City of Muskegon, a member of the Episcopal Church, and a proud Big Red.

Greg has served on many boards to promote and better our community.  His leadership and dedication serving on the Housing Board of Appeals has helped to fight blight and bring beauty to our city.  His passion for making Muskegon a better place has led to his current position as chairman of both the Nelson Neighborhood Improvement Association and the Neighborhood Associations of Muskegon. In addition he’s been a block captain, participated in the Citizen’s Police Academy, organized several car shows, and volunteered for many events as well as fundraising efforts.

Greg is a great promoter of the downtown.  He is employed by Kandu – an organization that helps individuals overcome barriers that may prevent them from joining the workforce.  Greg convinced his employer, to invest in the downtown by opening an office in the Terrace Plaza where his office currently resides.  He was also part of the Muskegon Retail Incubator and was instrumental in seeing the restoration and adaptive reuse of the Russell Block Market.

Greg’s friends describe him as a kind person who is willing to help anyone, loved by many, non-judgmental, has a belief in people and their potential, an ability to connect with individuals from all walks of life, and has a strong faith and commitment.

Greg is a caring individual with a love for Muskegon.  This love shows not only through his words but through his actions.  Muskegon is honored to call him one of its own.

Debra Griffin is described as dedicated, caring, and intuitive.

Debra has used her many skill sets to help improve the community by listening and helping those in the community who feel they are not being heard.  One way she achieved her objective was to found a group called “Parents Have Power”, a Muskegon parent involvement group working to unite the community in support of public schools.

Debra founded the parent’s advocacy group to give parents of students in Muskegon Public Schools a voice in the many changes proposed in the school system.  With Debra’s computer training, she was able to create a website and also started a Facebook page so parents may share ideas.  The website has also created a mechanism for sharing information on how to empower our children through education.

Debra also founded the political advocacy group, “Spark!”  Sparks! is a grassroots coalition whose goal is to begin an honest dialogue between community members about issues that currently affect the county, primarily in Muskegon and Muskegon Heights including feelings of isolation, race relations, poverty, high unemployment, neighborhood blight and violence, etc.

In addition, Debra is also the co-founder of “Big Girls Do Workout”, an advocacy group that promotes exercise and healthy eating habits and an overall healthy lifestyle targeted at full-size women in the community.  The website she created showcases different exercising techniques, healthy recipes, and other ways of releasing stress and ways to build self-esteem.

As her nominator states, “Citizens like Debra are the ones that make and keep our communities strong.  The work she is doing is not easy, but she does not let that stop her.  She continues to engage fellow citizens in the effort to improve our community.”

The Power Of Produce (POP) Club is a nationally recognized kids program started at the Oregon City Farmers Market in May 2011, to empower kids to make healthy food choices, introducing them to where their food comes from. This program is now being implemented in Markets across the US and in Canada too. We are pleased to bring this program to the Muskegon Farmers Market in 2014. We’re raising the next generation of Market shoppers and good food eaters!
HOW THE POP CLUB WORKS: KIDS, between the ages of 5-12:

Date: April 10, 2014
Time: 6:30 – 8:30 p.m.
Where: GVSU Michigan Alternative Renewable Energy Center, 200 Viridian Dr. Muskegon, MI 49440
A suggested donation of $15 collected at the door. This donation will go towards supporting The Power of Produce program at the Muskegon Farmers Market.

The County of Muskegon provides employment services for the City of Muskegon, including preliminary processing of seasonal employment applications for hire through Elwood Staffing.

There are several options for submitting an application for seasonal employment with the City of Muskegon Department of Public Works (Parks, Highway, Cemetery, Marina).

2.If you do not have internet access you may go to the County of Muskegon Human Resources located at 316 Morris Avenue, Suite 200. There will be a computer available for public access. Follow the instructions above.

3.Complete paper application and return to County of Muskegon Human Resources located at 316 Morris Avenue, Suite 200. Applications will be forwarded to Elwood Staffing.

It is recommended that you apply early, as these positions can fill quickly.

The City of Muskegon is an Equal Opportunity Employer

Recently, letters were sent to residents in the area of Muskegon and Webster Avenues requiring immediate compliance of placing trash carts on the street. Due to the many difficulties residents are having complying with this mandate, we offer the following solution.

Compliance will be delayed to give residents a chance to make an area available to place their cart at the street. Full compliance will take effect beginning the week of March 10th. From now through March 7th, trash will be picked up both in the alley and from the street. If you need assistance clearing an area on the terrace for placement of your cart, please contact the Department of Public Works at 724-4100 by March 7, 2014. The Department of Public Works will assist by clearing a small area on the terrace for placement of the cart. This will be done by request only, so please call if you would like our assistance.

We apologize for the difficulty placed on residents by attempting to make this change immediately. Our intent was not to place any extra burden on our customers, but to provide a better service due to the difficulties and delays in trash collection that have occurred due to inclement weather and other factors. This will also prevent the heavy garbage trucks from doing further damage to our alleys.

Public Act 63 of 2011, introduced the Economic Vitality Incentive Program (EVIP). The EVIP program sets certain requirements that cities must meet in order to receive revenue sharing monies from the state. An eligible city, village, or township will receive 1/3 of the maximum amount for which they are eligible for each of the three categories they fulfill the specific requirements for. The three categories are Accountability and Transparency, Consolidation of Services, and Employee Compensation.

Consolidation of Services
At this time, the City is publicizing its 2014 Consolidation of Services Plan. According to EVIP requirements, the plan shall include an update on the status of the new proposals that were in the previous year’s consolidation plan, including whether or not the previously proposed plan has been fully implemented, a listing of the barriers experienced in implementing the proposal, and a timeline of the steps to accomplish the proposed plan. In addition, the plan shall include 1 or more new proposals to increase its existing level of cooperation, collaboration, and consolidation either within the jurisdiction or with other jurisdictions, or a detailed explanation of why increasing its existing level of cooperation, collaboration, and consolidation is not feasible.

For the 2014 EVIP Consolidation of Services Plan the City focuses on the following new consolidation priorities:

Each of these areas is discussed more fully in the attached plan which can be viewed by clicking here.

If you have comments or questions about the 2014 EVIP Consolidation of Services Plan, you can leave them below or email them to finance@shorelinecity.com.