This project is being financed with funds from the HOME Program. All projects are subject to Section 3 of the Housing and Urban Development Act of 1968, which seeks to promote to the greatest possible extent employment training and business opportunity for low/moderate income residents and small businesses of the area.

Proposal packets for the property will be available Monday, January 25, 2016, at 12:00 noon to 5:00 p.m. until Friday, February 5, 2016, at Muskegon City Hall, CNS Office 2nd Floor, 933 Terrace Street, Muskegon, MI. The completed proposal packets must be returned to the City Clerk’s Office no later than 2:00 p.m. on Tuesday, February 9, 2016, at Muskegon City Hall. All proposals must be returned on the specification form supplied by the CNS office and must be completely and properly filled out. No electronically delivered proposals will be accepted.

Bid proposals should be placed inside a 9” x 12” envelope, addressed to the City of Muskegon Community and Neighborhood Services office with the title of the project address on the outside of the envelope along with the bidders name. All qualified residential contractors are encouraged to submit a bid.

The City of Muskegon reserves the right to accept and/or reject any, all or a portion of the submitted proposal. For more information contact the CNS office at 231-724-6717. The City of Muskegon is an equal opportunity employer and housing provider. 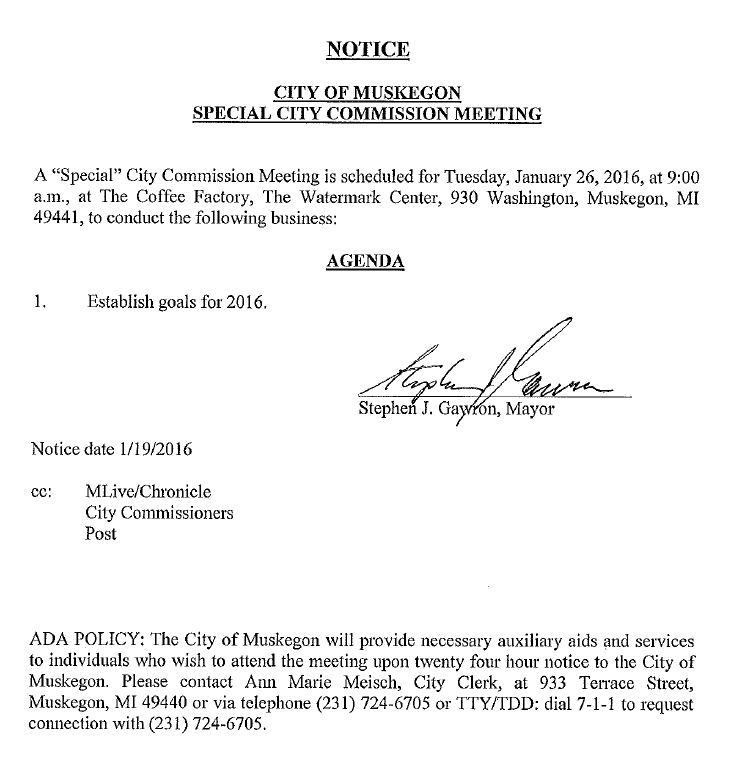 CITY OF MUSKEGON
ZONING BOARD OF APPEALS
CANCELLATION NOTICE
The regular meeting of the Zoning Board of Appeals scheduled for Tuesday, January
12, 2016, has been cancelled due to the applicant withdrawing their application.

12. Designation of Firm to Act as Legal Counsel: Parmenter-O’Toole.
13. New Business.
14. Adjourn.
ADA POLICY: The City of Muskegon will provide necessary auxiliary aids and services to
individuals who want to attend the meeting upon twenty-four hour notice to the City of Muskegon.
Please contact Ann Marie Cummings, City Clerk, at 933 Terrace Street, Muskegon, MI 49440 or
by dialing (231) 724-6705 or TTY/TDD: dial 7-1-1 and request a representative dial (231) 724-6705.
RESOLUTION DESIGNATING CITY FUND DEPOSITORIES
THE CITY COMMISSION OF THE CITY OF MUSKEGON DOES HEREBY RESOLVE, that the following financial institutions shall be and hereby are designated as official depositories of the City funds:

RESOLUTION DESIGNATING FIRM TO ACT AS LEGAL COUNSEL FOR THE CITY OF MUSKEGON, MICHIGAN

BE IT RESOLVED, that the City Attorney be and hereby is authorized to designate any other member of the firm of Parmenter-O’Toole to represent the City of Muskegon in court and in all other legal proceedings in such matters as the City Attorney shall, in his discretion, deem advisable, from time to time. No additional compensation shall be paid for such services unless same are of an extraordinary nature for which additional compensation is authorized in advance.

BE IT FURTHER RESOLVED, that in any matter wherein the City Attorney, or his firm, shall be unable by reason of a conflict to represent the City, the City Manager is authorized to use a Special Assistant City Attorney to represent the City in such matter, and any expenses thereby incurred shall be charged to the budget of the City Attorney, unless such services are of an extraordinary nature as determined by the City Manager, and in such event additional compensation may be authorized.

Adopted by the City Commission this 4th day of January, 2016.
AYES:

One location where you can:

The Michigan City, Village, and Township Revenue Sharing Program (CVTRS) sets specific requirements that local governments must meet to qualify to receive state revenue sharing funds. One of the key requirements of CVTRS is that cities make readily available to the public by December 1st “a citizen’s guide and a performance dashboard of their local finances, including a recognition of their unfunded liabilities.”

This Citizen’s Guide is published in accordance with the requirements of CVTRS. We have used the state-recommended reporting template in preparing the Guide. Because of the required time frame for submission, it is not possible to include audited financial data for the most recent fiscal year completed June 30, 2015.

Cities are to produce and make readily available to the public: 1) a Citizen’s Guide, 2) a projected budget report of revenues and expenditures including the current fiscal year and a projection for the immediately following year (including assumptions used) and, 3) a detailed listing of debt service requirements.

These CVTRS required reports are included in this Citizen’s Guide.

Also in accordance with CVTRS, the City has published on its website a performance measurement dashboard that monitors performance trends in four key areas: Fiscal Stability, Economy, Quality of Life, and Public Safety. The City’s performance dashboard can be accessed here.

The CAFR summarizes the city’s financial activity for the year and includes the unmodified opinion of the City’s independent auditor – Brickley DeLong, PC.

Highlights from the FY15 CAFR include:

You can view the FY15 CAFR by clicking here. You can view CAFR reports from prior years here.