Frank Peterson has served as the Muskegon City Manager since September 2013. He has worked in local government management since 2004, previously serving as the city manager in both Grant, Michigan and Springfield, Michigan. Frank holds an MPA from Western Michigan University.

A native of Flint, Michigan, Frank is very interested in community reinvestment and revitalization, and believes strongly in the powerful effects of community outreach and community involvement.  Frank strives to move Muskegon into its proper place as a leading community in the State of Michigan.  Since his arrival in Muskegon, Frank has become known for innovative and progressive programs and investments designed to improve our neighborhoods, welcome new business and residential investments, and greatly improve the City of Muskegon’s image across Michigan.

Frank and his wife Emma live in the Nelson neighborhood and they have a blended family that includes five children: Lila, Olivia, Elsie, Stella, and Calvin.  Frank and his family love spending time downtown Muskegon – especially at Trinity Health Arena. 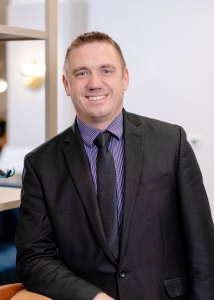