When GM declared bankruptcy, pundits remarked that it had become a pension benefit company that made cars on the side. Unfortunately, very similar dynamics are at work in state and local governments around the country. The lingering effects of the 2008 investment losses, coupled with lower tax revenues and changing demographics (like people living longer than expected) are causing pension and retiree healthcare costs to consume an ever-increasing slice of city budgets.

The Detroit Free Press recently ran an article on the subject of Michigan municipal pensions.

It is important for Muskegon City taxpayers to know that: 1) Muskegon is not immune to these pressures and, 2) specific steps have been taken to prevent pension and retiree healthcare costs from overwhelming the City’s budget.

Following are measures the City has taken in recent years to ensure that its pension obligations are kept manageable:

Summary: The City has well funded defined benefit pensions yet has made the decision to exit from the defined benefit pension business. Defined benefit retirement systems entail long-term risks and liabilities that the City does not want to have encumber its future. New employees are enrolled in a defined contribution plan that doesn’t entail long term liabilities for taxpayers. However, the process will take several decades to complete. The City has kept its pension programs well-funded and must continue to do so in the future until all pension obligations are met. 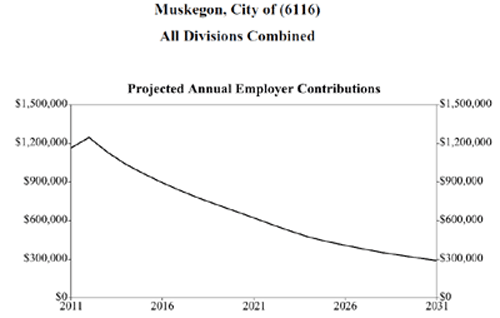 Phasing out of the defined benefit pension business will take many years. This graph from the 12/31/09 actuarial valuation shows how the City’s annually required DB pension contributions are projected to decline over time.

In addition to retirement pensions, many states and cities (including Muskegon) have made promises to provide health care benefits to retirees. Typically these promises were made at a time when healthcare costs were moderate and extending coverage to retirees did not appear too costly. Today, however, retiree healthcare has become a major liability and budget burden. Like escalating pension costs, retiree healthcare costs threaten to crowd out expenditures for police, fire and other essential public services.

Most governments do not set aside funds to pay for future retiree healthcare liabilities as they do for pensions. Instead, they fund these costs on a “pay-as-you-go” basis out of the annual operating budget. Pay-as-you-go funding means that investment earnings do not accrue to help pay future costs. Instead, actual benefit payments consume an ever-growing portion of the budget as the number of retirees grows and healthcare costs escalate.

The City of Muskegon recognizes this issue and has taken specific steps to ensure that its retiree health care obligation remain manageable:


Summary: Unlike most state and local governments, Muskegon has advance funded its retiree health care obligations for more than 20 years. Still, the City faces a large future liability (about $15 million) to fully meet its commitments. In addition to paying the full actuarially-determined cost each year, the City is actively pursuing reductions/eliminations of benefits for future retirees. This helps lower the outstanding liability.

This is a test
Scroll to top